The field of Arab American studies is being revolutionized by a movement of independent scholars that is leveraging the new accessibility of genealogical information and newspapers in digital databases. Important topics like the history of the “Syrian quarter” in Lower Manhattan and the biographies of key Arab American political and literary figures are being finally written by scholars like Linda Jacobs, Jean Gibran, Charles Malouf Samaha, Francesco Medici, Mary Ann DiNapoli, Gregory J. Shibley, and Robert Goodhouse.

Robert Goodhouse, Vice President of Rapiscan Systems, is an enthusiastic and friendly member of this historical community, and he has been especially focused on topics related to his own ancestors: prominent early publisher Najib Diab and the writer Elia Abu Madi. Goodhouse has published quite thorough biographical articles online, constructed elaborate family trees, and served as an avid conduit of information for the larger group of independent scholars. Most recently, he and a number of his colleagues have been analyzing and labeling a fascinating photograph of a dinner party held in 1929 for the well-known writer Kahlil Gibran. Given that New York City is now building a memorial to the Arabic-language writers shown in this photograph, designed by NYC Parks Department architect George Vellonakis and French-Moroccan artist Sara Ouhaddou, I thought it a good time to interview Goodhouse about this project and about his overall work. 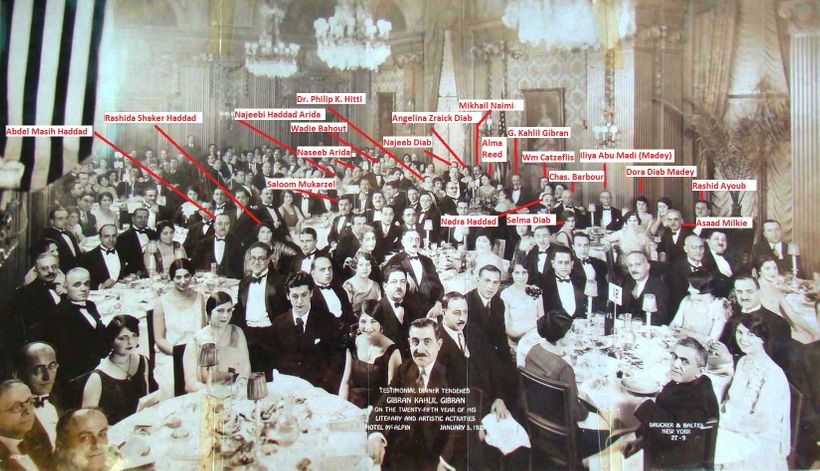 1. What do you find exceptional about this photograph? What was the importance of this gathering?

The 1920s were years of prodigious output for a group of around ten writers who formed a literary society in New York called “The Pen League.” Kahlil Gibran led the group, and on January 5, 1929, the organization honored him with a dinner party. The society’s members and their guests were joined by notable Arab American leaders in business, journalism, and academia, about 100 people in all. This photograph was taken at the dinner, and my colleagues and I have been able to identify most of the Pen League members pictured in it. I’m unaware of any other photo that shows most, if not all, of this famed cohort of writers together. 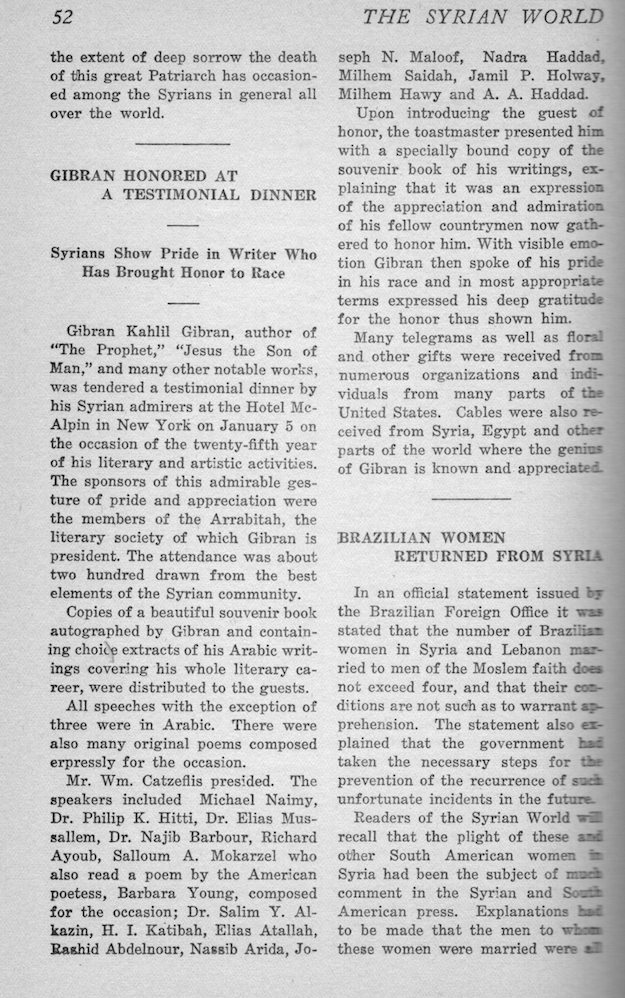 The League members largely wrote in Arabic, although one of the most famous works emerging from its membership is Gibran’s 1923 English-language book, The Prophet, which was already a huge best-seller by 1929. Most of the League members were poets, and many of their poems are still memorized by students in the Arab world today. Some have even been put to popular Arabic music.

This dinner was held the day before Gibran’s forty-sixty birthday, and it celebrated a quarter-century since his first art exhibition in Boston in 1904 and the publication of his first poems in 1905 in Manhattan. To me, the photo represents more than just an evening recognizing and celebrating Gibran. It also captures the vitality and sophistication of the early Arab American immigrant leaders, revealing their accomplishments in all fields and showing the evident solidarity among a diverse group of different religious backgrounds, all bound by the Arabic language. They could gather together to celebrate the success of one of their most famous literary lights.

2. In historical memory and conventional wisdom, Kahlil Gibran often seems to emerge as an isolated individual — disconnected from time and place — who offered wisdom to the world from on high. Yet, what does this photograph say about his embedding within an actual community in New York City, and in the United States?

I believe the 1974 work, Kahlil Gibran, His Life and World by Jean Gibran and Kahlil G. Gibran, recently thoroughly revised as Kahlil Gibran: Beyond Borders by Interlink Publishing, provides the best insight into the complex character of Kahlil Gibran. All his life he was a “joiner.” From 1913, he was on the board of and a major contributor to “The Arts” (“Al-Funoon”) magazine, published by another League member shown in the photo, Naseeb Arida. He was also involved with several Syrian/Lebanese relief organizations before and during World War I. The photograph shows the breadth of his Arab American friendships and acquaintances, and he maintained close friendships with non-Arabs such as the journalist Alma Reed (identified in the photo), Indian political activist Sarojini Naidu, and many American and international literary and art personalities. 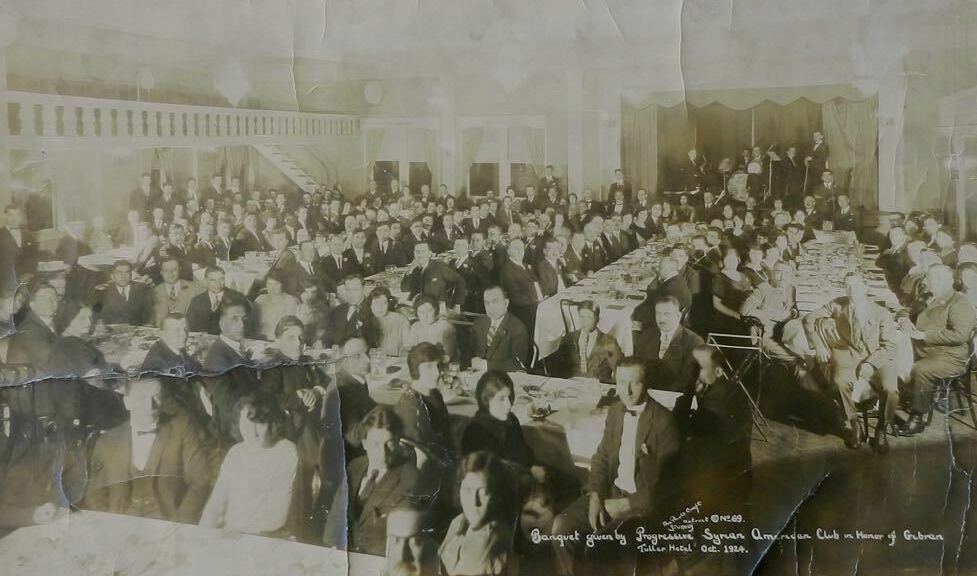 Gibran considered New York his home; he hosted a fairly constant stream of friends at his Greenwich Village studio apartment, and he wrote and spoke regularly on topical issues in the 1910s and 1920s. From 1904 to 1920, he published over 140 Arabic-language poems in four New York journals alone, many of them dealing with political issues. So, the mystical nature of “The Prophet,” with its universal audience, was an important part of his personality, but as the photograph shows, in the New York Arab community, he was admired, well-liked (for the most part), and certainly appreciated as a key member.

3. How does the project of identifying the individuals in this photograph connect to your own research interests? What do you believe are the central tasks for Arab American studies and for the genealogical and historical research work of independent scholars and local historians?

The history of the Middle East has been a personal interest of mine since my college days. My business work has been based on the belief that commerce between the United States and the Middle East could encourage improved mutual understanding of East and West. In that respect, I have remained an optimist.

I have also had a long-term personal interest in my own ancestry, starting with my father’s German family. Then, after being exposed to Dr. Linda Jacobs’ research for her recently-published, seminal work on the early Syrian/Lebanese immigration to the United States, Strangers in the West, a long-nascent interest in my own Syrian-Lebanese ancestry became recast in real documents and facts. I began to learn that many of the stories I had learned as a teenager from a great aunt (also in the photograph) were true and verifiable. I had seen photos of some of my own family as children and teenagers (circa 1905), but this banquet photo shows some of them at an elegant social event in adulthood. I had also read and heard stories about the Pen League members and Gibran, as well as about some of the community leaders in post-World War I New York, so to see them together at one gathering was very satisfying. 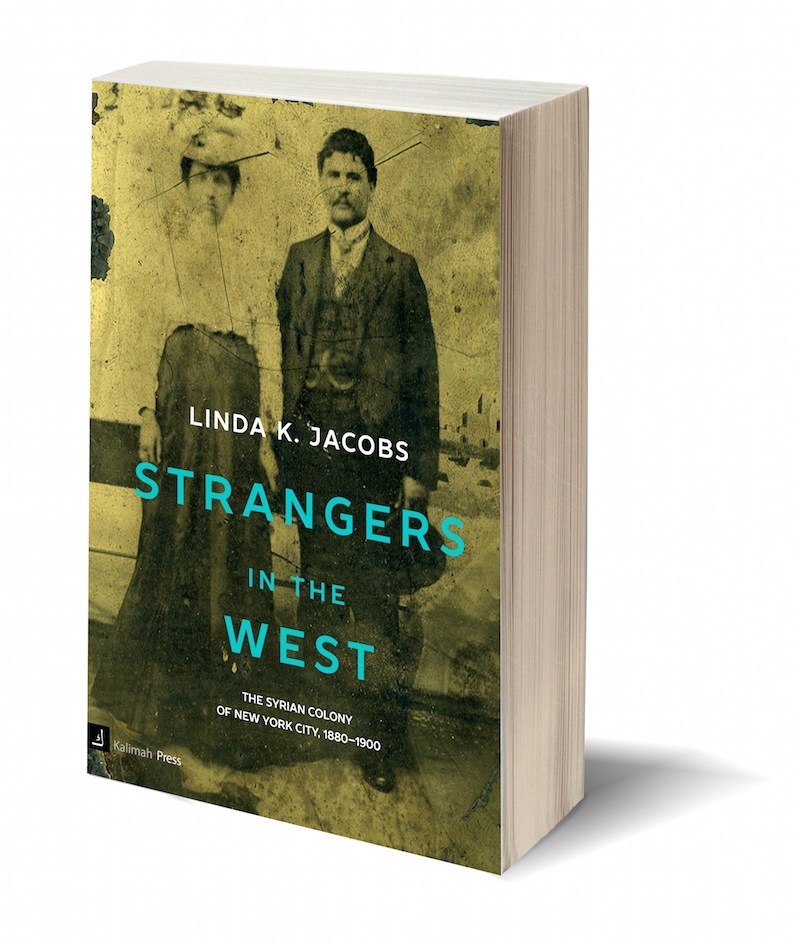 Strangers in the West By Linda K. Jacobs

I believe the key to the study of family, and especially family histories in this important period for Arab Americans, is rigorous confirmation of facts. We can’t just repeat family lore. As in any historical writing, beginning with original sources helps us reach our own conclusions. It is our conclusions, not the data itself, that is ultimately subject to debate and interpretation. We are still in the early days of discovery – still gathering data to be followed by interpretation – for this period of Arab American history so important in its literature and in its politics. 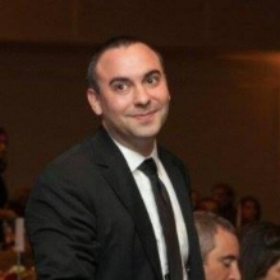 Todd Fine is the president of the Washington Street Advocacy Group, a nonprofit that advocates for the physical preservation of the Lebanese neighborhood of Downtown Manhattan that was associated with Kahlil Gibran. He successfully campaigned for the government of New York City to approval a public art memorial for the Arabic-language literary figures, including Kahlil Gibran. In 2011, he directed Project Khalid, a campaign to celebrate the centennial year of the publication of Ameen Rihani's The Book of Khalid (1911), the first Arab-American novel in English which inspired The Prophet. The campaign included events at the U.S. Library of Congress and the New York Public Library. He also edited a critical edition of The Book of Khalid that was published by Syracuse University Press in 2016. Currently, he is a PhD candidate in history at the Graduate Center of the City University of New York. He holds a BA in government from Harvard University (2004) and an MA in international relations from the Maxwell School of Citizenship and Public Affairs at Syracuse University (2007).