by Bob Goodhouse
© all rights reserved 2020
Salim S. Sarkis (1867-1926), born in Beirut, lived at 76 Broad St in the Syrian New York Colony from 1899-1904, and published the Al Musheer (“The Counselor”) weekly newspaper at 38 Broad St. Like many Syrian-Lebanese of the time, he left Beirut for Egypt, and ultimately the United States. Unlike many of his compatriots, he decided to return to Egypt after a few years in America.Al Musheer had been a popular Egyptian weekly in Cairo from 1894-1899, famous for being one of the first journals to use political cartoons to editorialize what Sarkis perceived as corrupt Egyptian and Ottoman officials (one cartoon depicted an Ottoman-appointed governor as an octopus, grabbing money with each tentacle.) The paper, like what we can tell of the man, had a certain sense of self-deprecation; on its masthead, instead of “Editor”, he described himself as “the Dummy behind the Scenes”[1] and in one of his reviews of an Arabic version of Hamlet, he tongue-in-cheek questioned the literary benefit of its happy ending and word by word translation, which made little sense of the original (it was also a musical). 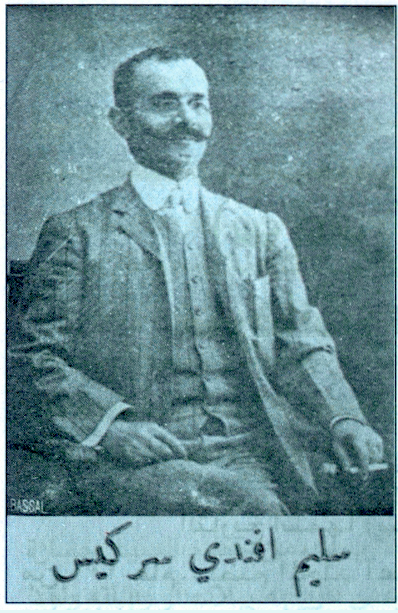 After printing an article in 1898 ridiculing Kaiser Wilhelm’s mustache, he had to close the paper and escape Egypt, self-reportedly in his nightshirt, from an Egyptian prison to board a ship at the Suez Canal. In his articles he had also written that the Ottoman Sultan had bribed the Kaiser with GBP 3 million, leading to his death sentence from the Sultan, and managed to upset the Islamic Shaikh Al Azhar, as well as Sarkis’ own Maronite Cairo Bishop, so the mustache report was not his only journalistic offence. Apparently the Khedive of Egypt was so angry with him that Sarkis’ arrest occurred on his wedding day.Lord Cromer, British High Commissioner in Egypt and advocate of a free Egyptian press, was usually Sarkis’ champion during many of his episodes in criticizing the Government, but even Cromer was unable to protect him from the scandal caused by Sarkis’ episode of the Kaiser’s mustache, and the reported bribe from the Sultan. While still in Cairo, Sarkis sensed a readership market among educated women, so he also published and edited a famous women’s magazine, Meraat al Hasna (“Mirror of the Belle”) under the female pseudonym of Miriam Mazhar. By creating this fictitious female editor, Sarkis added for years to the belief of an independent female Egyptian publisher, with some analysts, upon the unveiling of the truth of his role, labeling him a “feminist.” He may well have been a feminist, but he clearly knew he was exploiting a growing market.[2] Sarkis also popularized the Arabic term “as-sha’b” (the people”) in his journalism, for the first time in newspapers making a clear distinction between the elite and popular cultures.
One of his 1897 articles in Al Musheer imagines a discussion between the Sultan and Sarkis (representing “the people”) resulting in the Sultan’s confusion and lack of understanding of whom “the people” may or may not be. The term was later widely used in other Egyptian journals, including Al Ahram, regularly.[3] When he arrived in New York in 1899, he got right to work and set-up the New York version of Al Musheer , continuing his protests against the Ottoman Sultan and the Empire. A September 1899 news article in the Philadelphia Inquirer announcing his arrival from Cairo headlines him as “The Syrian Lafayette”, describing him as a major agitator for reforms in the Middle East.
Already by April 1900 Sarkis was being quoted in the New York Times for his criticisms of the Ottoman Sultan and Empire, the Maronite and/or Orthodox priests in New York who accepted medals and funds from the Sultan (he wrote: “[…] the medals represent the blood of the massacred Armenians”), as well as the United States Government for not protecting Syrian-Americans when they visited the Ottoman Empire and were forced to pay back taxes. Editorials urging his compatriots to “unite with one heart with your Muslim brethren as your interests are one”, statements such as “Prayer will not change nature”, and a belief that Adam and Eve were “mythological characters” 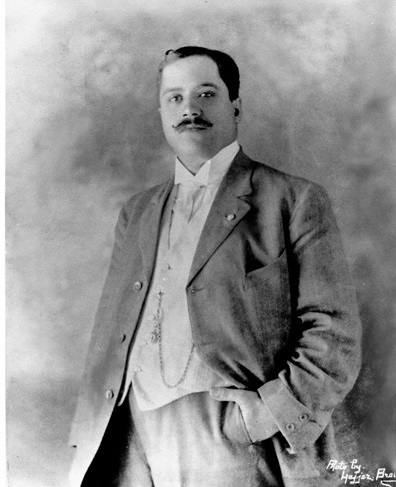 made him few friends among segments of the Syrian immigrant colony, most of whom took their Christian religion very seriously. Sarkis seems to have taken politics seriously, albeit often dashed with humor, but not religious dogma, and not respect for those in powerful political positions. He never seemed to attract the same strong following and reputation he had held in Egypt as a political agitator and leader, probably as a result of the enemies he made among Colony members. However, he had at least a few early-Syrian Colony friends, including Najeeb Diab, editor of Meraat ul Gharb (“Mirror of the West”), and Kahlil Gibran’s publisher, who stood-by Sarkis after he was attacked at 81 Washington St in 1901.
A day after Sarkis lost his assault case Diab published an editorial calling two witnesses, who testified Sarkis had raised his cane inciting the attack, “liars” (Diab also described one of the two as a “piece of fat”). Four other trial witnesses had sworn Sarkis was the one assaulted. Sarkis published the same editorial in Al Musheer. Both editors were then sued for libel, in a case lasting 6 months, and settled out of court. 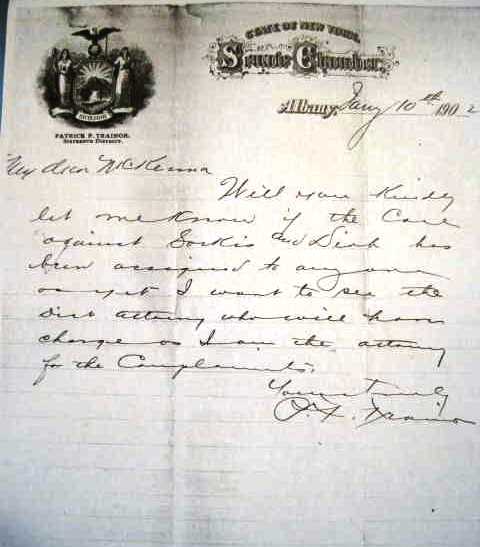 Sarkis also served as a matchmaker for another friend, Kahlil Gibran, introducing him to an Irish-American concert pianist, Gertrude Barry. Gibran and Barry reportedly had a two-year love affair, and, without question, they had a long-term friendship. Sarkis continued his own correspondence with Barry. On 20 February, 1908, Sarkis wrote to her from Cairo about Gibran, giving her credit for inspiring him, and perhaps “helping him” in developing his philosophy and style:

You may have heard that Gibran has been writing for the last three years some articles to al-Mohajer of NY, articles under the heading of “Tears and Smiles”. They are very fine. I read every one of them. I copy some to my magazine. I want to tell you a secret feeling of my own. I may be wrong but let me say it. He only began these articles and this style since I introduced him to you. I see you in every line of those articles. I feel that either you are helping him or he has given us your impressions of life.

In the same letter, Sarkis congratulates himself for introducing Barry to Gibran, writing that he “gave [her] Gibran”:

...As for Rustum, I only asked him to call and see you that he may write to me about you. I know that he is not the man you like, but he was my messenger only. When I wanted to give you a sample of the Syrian I gave you Gibran and I do not regret it. Do you?[4]

Sarkis did not live-up to the moniker of “The Syrian Lafayette”, perhaps because of the enemies he made in the Colony, or perhaps because of a lack of financial success; he closed Al Musheer in 1903, and returned to Cairo in 1905 after setting-up two short-lived newspapers in Massachusetts. In the interim period he became an editor at Meraat ul Gharb, and in 1904 its Press published al-Qulub al-Muttahidah fi’l-Wilayat al-Muttahidah (“United Hearts in the United States”), that is considered the first Arabic novel written outside of the Middle East. 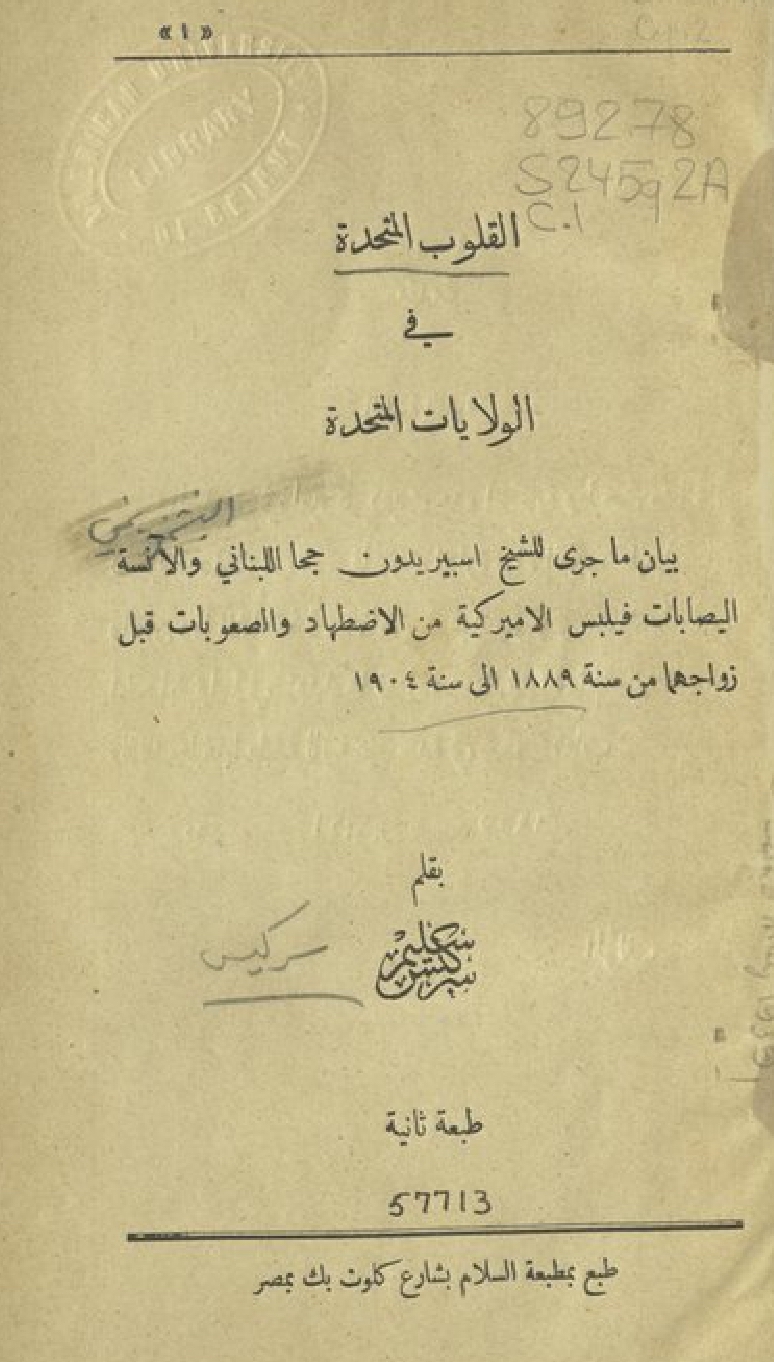 He had left a bride in Cairo, and liberalism was increasing in both the Ottoman Empire and in Egypt. Now back in Cairo, he started a new journal, Majallat Sarkis (Sarkis Magazine), which he published until his death in 1926. There he continued using humor to be a thorn in the side of government and religious officialdom, while joining a new circle of friends in the salon of May Ziadeh each week. 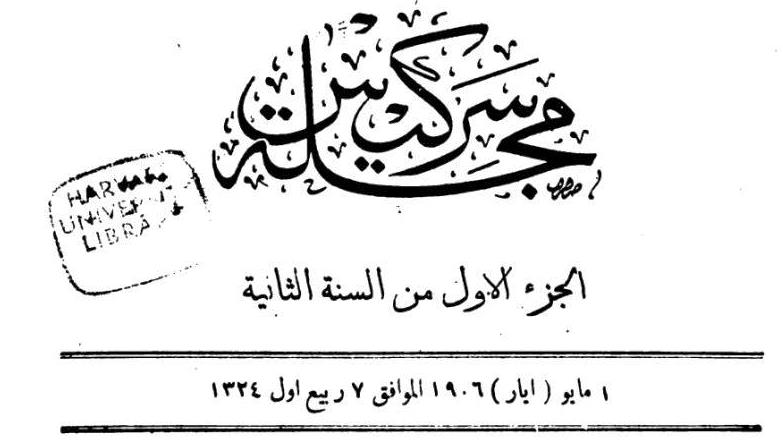 Following the First World War, he was an advocate of a “Greater Syria” including modern-day Lebanon, Syria, Iraq, Palestine, and Israel, and was Secretary of the United Syrian Club, which included prominent Moslems and Christians (such as the Islamic reformer Rashid Rida) but failed in its efforts to avoid splitting the region into separate states.He made the US papers at least twice after his return to Cairo; first in 1916 when he cabled Meraat ul Gharb “Famine in Lebanon. 80,000 dead”, which appears to be the first notice of the 1916 Mt. Lebanon famine in the United States, and was printed in newspapers throughout America. His second well-reported news item was in 1919 and was more in keeping with the earlier indications of his sense of humor: he applied for the job of “Kaiser Custodian”, for compensation, based on his 1898 condemnation of the Kaiser as a “madman” (and assumedly for the mustache critique), for which he had been punished.[5]His zeal seems to have had a limited audience in the early New York Syrian Colony, but during his second Cairo period he appears to have found a wide number of readers who enjoyed his wit and style. While no “Syrian Lafayette”, Sarkis was an important advocate of free expression in the Arab World, leaving a body of work including ten books, editorial work on five newspapers, including Al Ahram, several important enemies, and a few strong friendships; not to mention his matchmaking work for Kahlil Gibran. 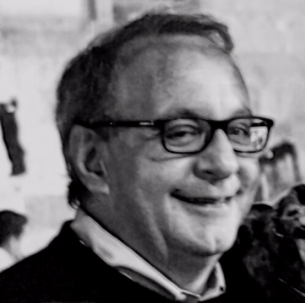 Bob Goodhouse is Vice President of the Rapiscan/AS&E Division of OSI Corporation, responsible for the company’s X-Ray security machinery and services business in Iraq and other Mid-Eastern countries, and the former FMC Corporation’s Corporate Vice President for the Middle East and Africa. Goodhouse is a descendant of Najeeb Diab, the publisher of one of America’s first Arabic newspapers, and who sponsored and first published many of the mahjar poets and writers in the early 1900’s, including his great uncle Elia Abu Madi. He is Past President, and a current Board Member of the Washington Street Historical Society (www.wshsnyc.org), of New York City.
[1]Hartmann, Martin, The Arabic Press of Egypt, London: Luzac & Co., 1899, p 56.
[2] Booth, Marylyn, May Her Likes Be Multiplied: Biography and Gender Politics in Egypt, Berkeley: University of California Press, 2001.
[3] Reimer, Dietrich, Die Welt des Islam, Pennsylvania State University, 1964.
[4] Mujais, Salim, ed., Letters from Kahlil Gibran to Gertrude Barry, Beirut: Kutub, 2013, pp. 31-32.
[5] “Applies for Job as Kaiser’s Keeper”, Wisconsin State Journal, 27 January, 1919, p. 4.
Copyright 2022 © The Kahlil Gibran Collective | Disclaimer | Sitemap
Website by Delta Web