Prayer: A Forgotten Poem by Gibran and the Members of Arrabitah

The first Arabic-language literary circle in North America, known as al-Rābiṭah al-Qalamiyyah, or simply Arrabitah (literally in English, “The Pen Bond,” or “The Pen League,” or “The Association of the Pen,”), was founded or re-formed (its first official formation was due to Nasib Aridah and Abd al-Masih Haddad and dates back 1916) on 28 April 1920 by a group of Arab immigrant writers in New York led by Kahlil Gibran. The other members of the society were Mikhail Naimy, Elia Abu Madi, Rashid Ayyub, Wadi Bahout, William Catzeflis, Nadra Haddad (Abd al-Masih’s brother) and, at least for a certain period, Ameen Rihani.

Unfortunately, the league, that dissolved following Gibran’s death in 1931 and Naimy’s return to Lebanon in 1932, could publish only an anthology collecting some of its members’ Arabic best poems. It came out in New York a year after society’s (re)foundation with the title Majmūʻat al-Rābiṭah al-Qalamiyyah li-Sanat 1921 (“The Collection of the Pen Bond for the Year 1921,” New York, 1921). 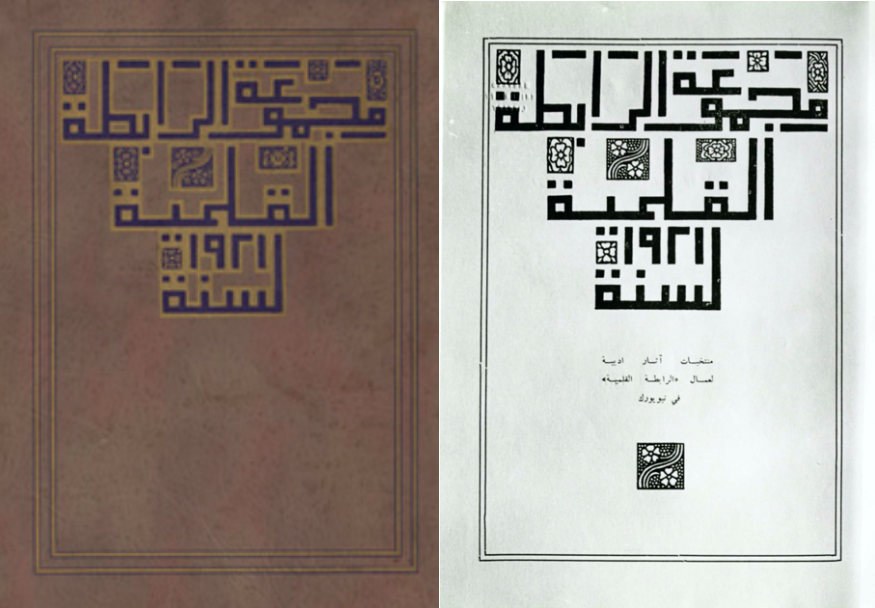 The Collection of the Pen Bond for the Year 1921

The volume includes amongst others the almost unknown poem Dū‘a’ (literally, call, invocation of God, supplication, request, plea, good wish), that Gibran wrote in collaboration with Naimy, Aridah and Abd al-Masih Haddad, and that was signed by all four writers – a unique case in the story of Arrabitah. 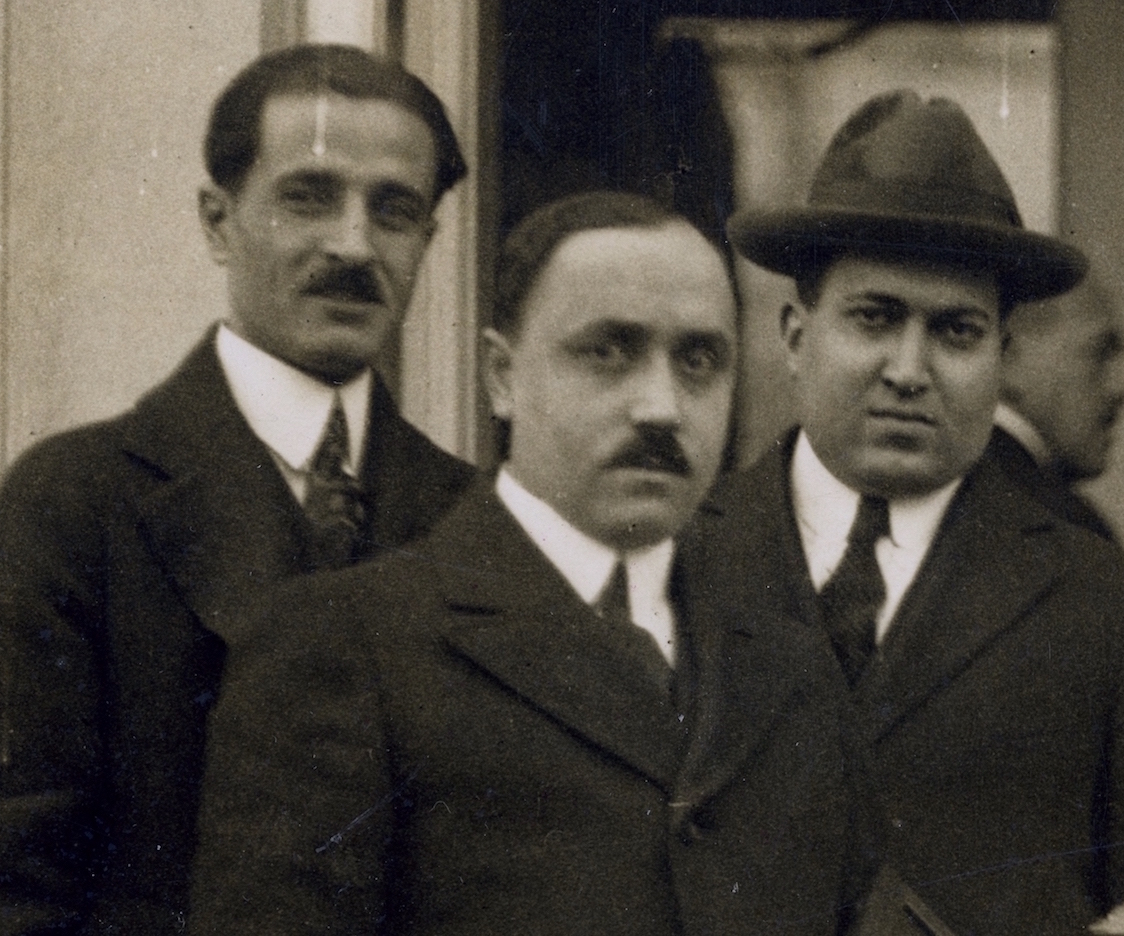 The late Arthur John Arberry (1905-1969), a British respected scholar of Arabic, Persian, and Islamic studies, included said rare and precious poem in his book Modern Arabic Poetry: An Anthology with English Verse Translations (first published by Taylor’s Foreign Press in 1950 and reprinted by the Cambridge University Press in 1967) under the title Prayer. Below are Arberry’s translation into English of Dū‘a’ and its original Arabic version.

Sing me, O silence of the night,
A melody
Hymned in the silent Infinite
Eternally.

Open mine eyes, ye stars above,
Lit by your ray
That I may know the secret of
The hidden Way.

Make me a carpet, O ye flowers,
That I may rise
Thereon transported, to the bowers
Of Paradise:

And, as the slave desireth still
But liberty,
There let me pasture at my will
For ever free.

Breezes of night, O suddenly
Seize up my soul,
Before your feet that it may be
An offering whole.

Too long a prisoner I have lain
In dark despair,
Too long the weight of human pain
Constrained to bear.

For human fortune what care I?
O lift me, then,
And let them in their squalor lie,
These mortal men.

My heart is weary of their ways
And changeless use,
Their loves, their hates, their hollow praise,
Their mean abuse:

My tongue is grown to fear what next
My tongue may tell,
My mind is wretched, and perplexed
In its own hell.

My slumber is a trembling breath,
My bed a thorn,
My righteousness is sin, my faith
All turned to scorn:

My drink a thirst unquenchable
And raging yet,
My food, a hunger of the soul
Insatiate:

My robe, the ashes of my mind,
The winnowed fires
Borne fitfully upon the wind
Of vain desires.

Such is my life: unending wars,
Which if I gain
My guerdon is the prison bars,
And spirit slain. 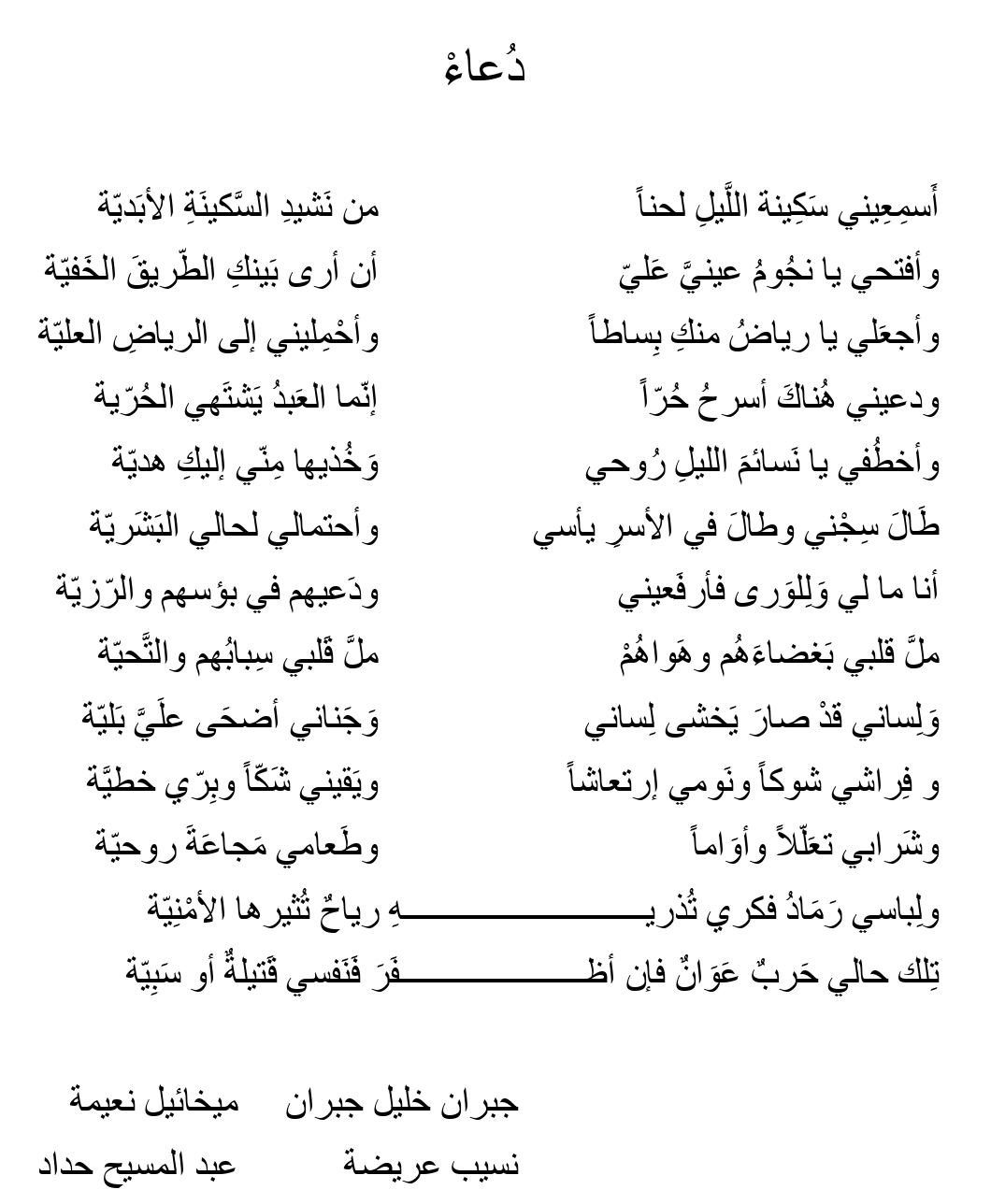 The Author of this article would like to thank:

Nadine Najem for transcribing and revising the original Arabic text;
Dr. Nadim Shehadi, Executive Director of the Lebanese American University’s New York Headquarters and Academic Center, for sharing the picture of the Members of the Syrian Lebanese League in North America in front of the White House (Washington, D.C., 1921).