Kahlil Gibran and the Armenians

Kahlil Gibran and the Armenians

by Francesco Medici - Translated into English and Arabic by Nadine Najem.

The 24th of April (today) in 1916 for many Armenians around the world commemorate the tragic events of what is now recognized as the Armenian Genocide (or Holocaust). The atrocities committed by the Turkish-Ottoman forces between 1914 and 1923 are estimated to have killed 1.5 million Armenians, in what is widely accepted as the “first modern day genocide”. Second only to the Holocaust, many studies have been made and continue to be made, about these horror killings which occurred during the WWI period. Around the same time, mainly in mount Lebanon, an induced famine was also killing many hundreds of thousands of Lebanese and Syrians; this was also a direct cause and effect by the strong arm of the governing Turks who ruled the area.

New York 1916 - As the secretary of The Syrian–Mount Lebanon Relief Committee, Gibran believed that the famine in Lebanon and Syria had been premeditated by the ruling Turkish authorizes. In February of 1916, some 80,000 Lebanese-Syrian people had already lost their lives, and thousands more were dying each day. Gibran was under the belief that the same injustices that had been occurring to the Christian population in Armenia, were now happening in the predominantly Christian area of Mount Lebanon.

Championing a heroic relief campaign, he solicited much needed support, raising funds, food and medicine, to be shipped from the United States and given to the longsuffering peoples of Lebanon and Armenia. During such troubling times, Gibran also used his poetic-prose to inspire hope and justice, inspiring “a new era” of voices that began to denounced not only the Turks indiscriminate killing of Christians, but calling for the Turkish-Ottoman rule of the region to come to an end. His efforts did not go un-noticed, especially to the Turks in Lebanon and abroad, who ‘watched’ Gibran closely. This period signified a major turning point for the centuries old ruling Ottomans, who did not like the fact that many Syrian leaders were supporting the Allies in the war against them; a war the allied forces would eventually win.

The following article ‘Gibran and the Armenians’ was originally written in Italian, by Author, Critic and Gibran scholar, Francesco Medici and is published here today along with the Arabic translations proceeding the English. Both the English and Arabic translations were made by Nadine Najem contributing writer to the Kahlil Gibran Collective.

Gibran and the Armenians

Translated into English by Nadine Najem. 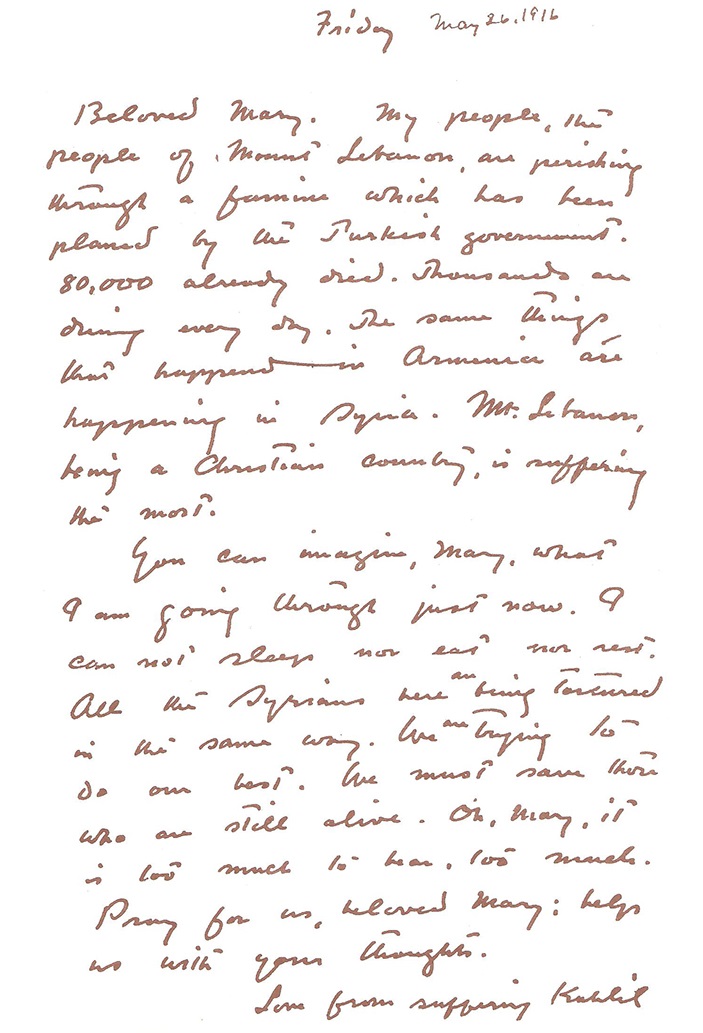 “My people, the people of Mount Lebanon, are perishing through a famine, which has been planned by the Turkish government. Eighty thousand already died.  Thousands are dying every day. The same things that happened in Armenia are happening in Syria. Mt. Lebanon, being a Christian country, is suffering the most.You can imagine what I am going through just now. I cannot sleep nor eat nor rest. All the Syrians here are being tortured in the same way. We are trying to do our best. We must save those who are still alive.”

New York, May 26, 1916 - Kahlil Gibran wrote these painfully sad words, in a written letter sent to his friend and patroness, Mary Haskell. He mourned not only the tragedy of his countrymen, but also the Armenian genocide. Dubbed the “Great Evil “or “Medz Yeghern” as it become known by, had started in 1915, done by the Sublime Porte in the territories of Ottoman Anatolia.

At the same period while the genocide was occurring, the region of Greater Syria, was suffering from a severe drought and bringing with it a devastating invasion of locusts. Adding to this cruel situation, the region was under siege by Turkish-German forces that prevented the import of food, thus bringing on what had become known as “The Great Famine” of Greater Syria.
The Syrian-Mount Lebanon Relief Committee was therefore established in New York in June 1916. Gibran, as the committee's official secretary, did not limit himself to just paperwork, but he also committed to traveling across the United States urging American missions to help send humanitarian aid to Syria and Lebanon. 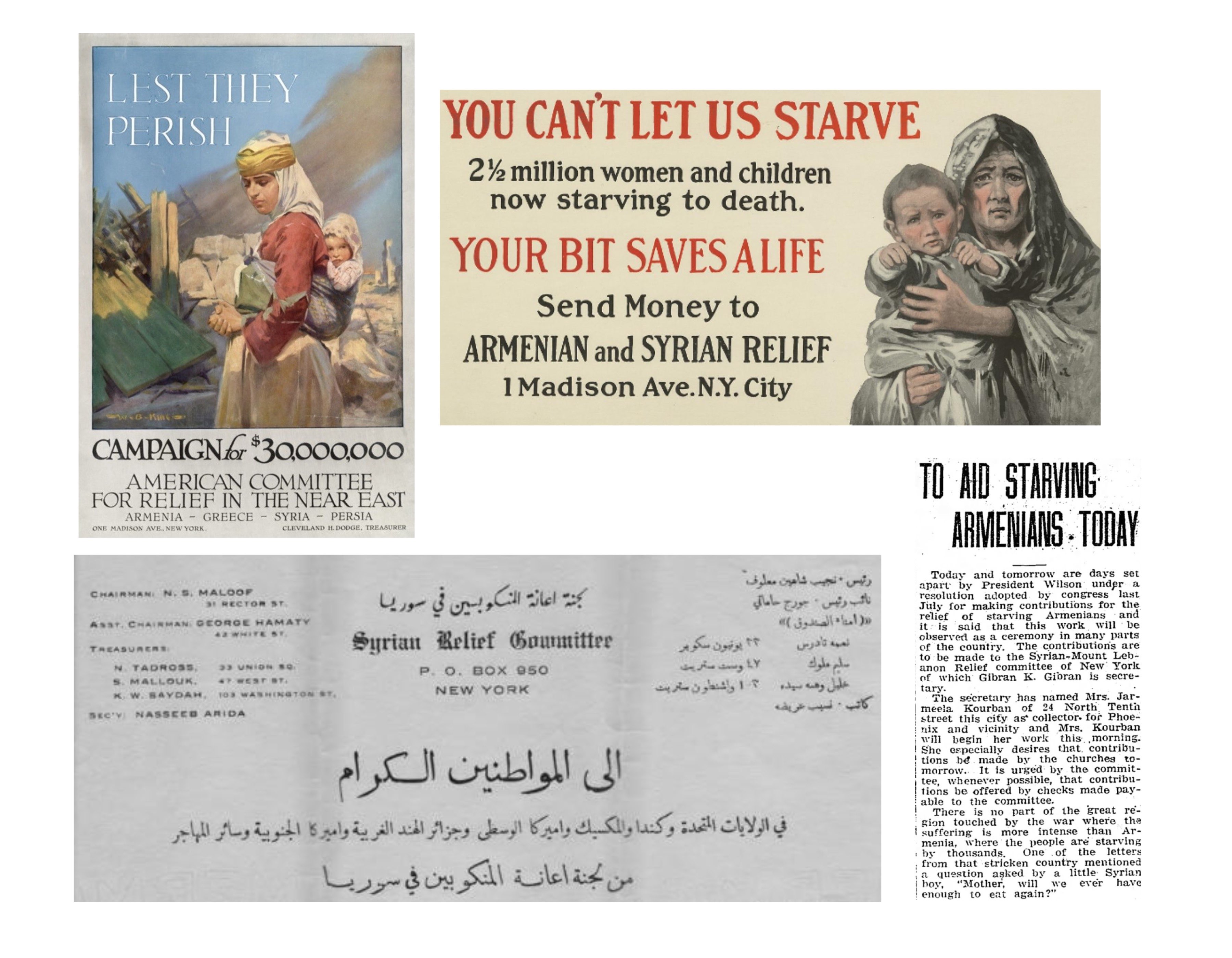 On the 17th of June, he wrote a letter to Robert Lansing, the Secretary of State of the United States: 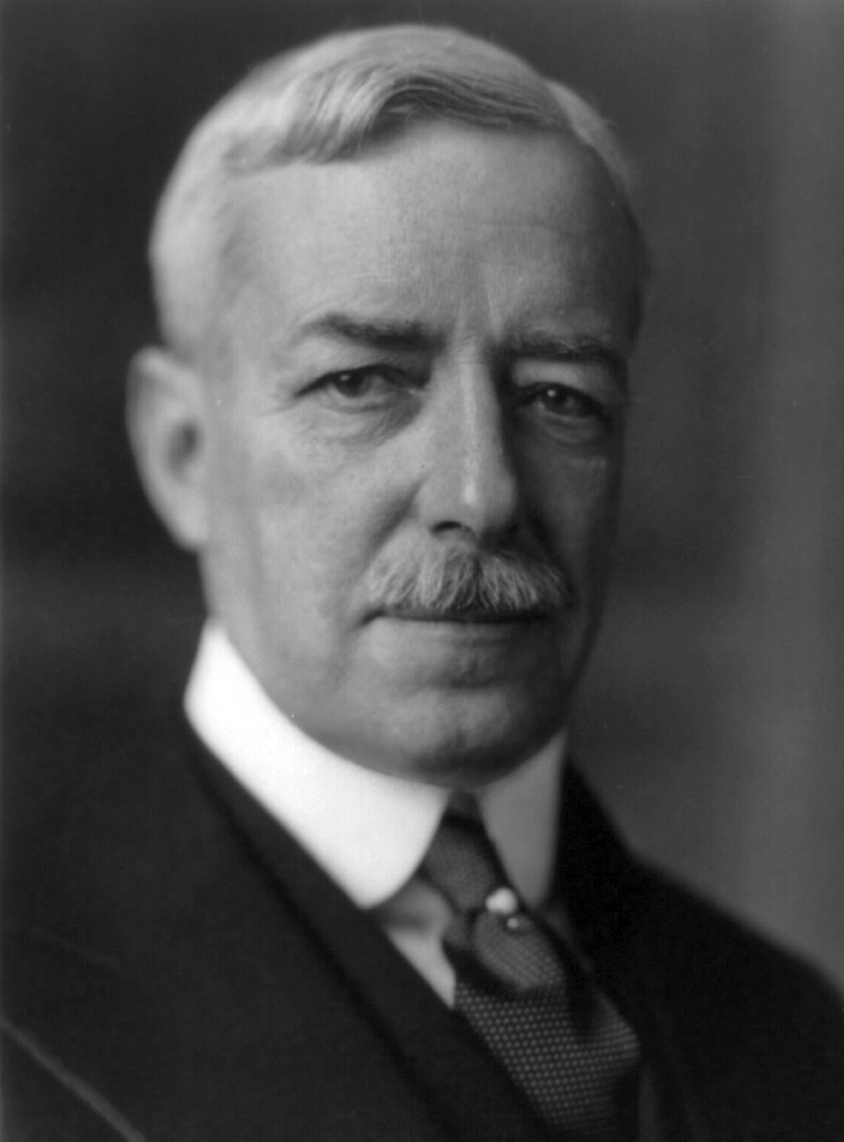 “The people of Syria and Mt. Lebanon, Sir, are actually dying of starvation and the diseases resulting from lack of nourishment. Their distress is appalling, and they are to-day a helpless people doomed to extinction […] We appeal to you, Sir, we the Syrians of this country [USA], thousands of whom are American citizens, in behalf of our stricken country [Syria] and our starving people […] The Syrian-Mount Lebanon Relief Committee is working in cooperation with the American [relief] Committee and we hope to raise enough funds soon to be able to send a shipload of food supplies […] to ward off, if possible the effects of the impending famine that threatens the  extinction of a whole race.”

By the 17th of December, and with the help of the U.S. Navy and Red Cross, essential food and medicine worth $ 750,000 for the oppressed populations was loaded on board the Italian steamship Julius Caesar. As a sign of gratitude, the New York Armenian and Syrian communities gifted Gibran a precious ruby ring. On the 4th of April, Mary Haskell notes his unwillingness to receive it: 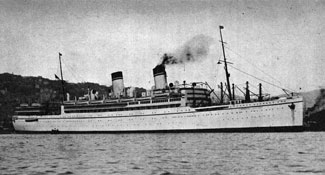 “He showed it to me – worn on his forefinger – the most beautiful pigeon-blood that I’ve ever seen – in a gold setting, Syrian design.” ….” a gift that he received with emotion, but not without some reluctance “They put so much money into it, for me, when they ought to have sent that money to Syria.”

The handmade jewel was made by an Armenian goldsmith on Fifth Avenue. The respect that Gibran experienced among immigrants in New York at that time was also noted by his colleague painter and neighbor Juliet Thompson, who declared years later in an interview with an American newspaper:

“I’ve seen Armenians and Syrian's kiss his hand and call him Master.”

But in fact, this ring was not the only personal object that tied him to the Armenian people. A few years later, he would purchase for just one hundred dollars, from a deceased friend’s heirs newly deceased companion, a rare and precious tapestry. Mary Haskell offers (yet again) a brief note of this item in her diary on the 21th of May 1924: 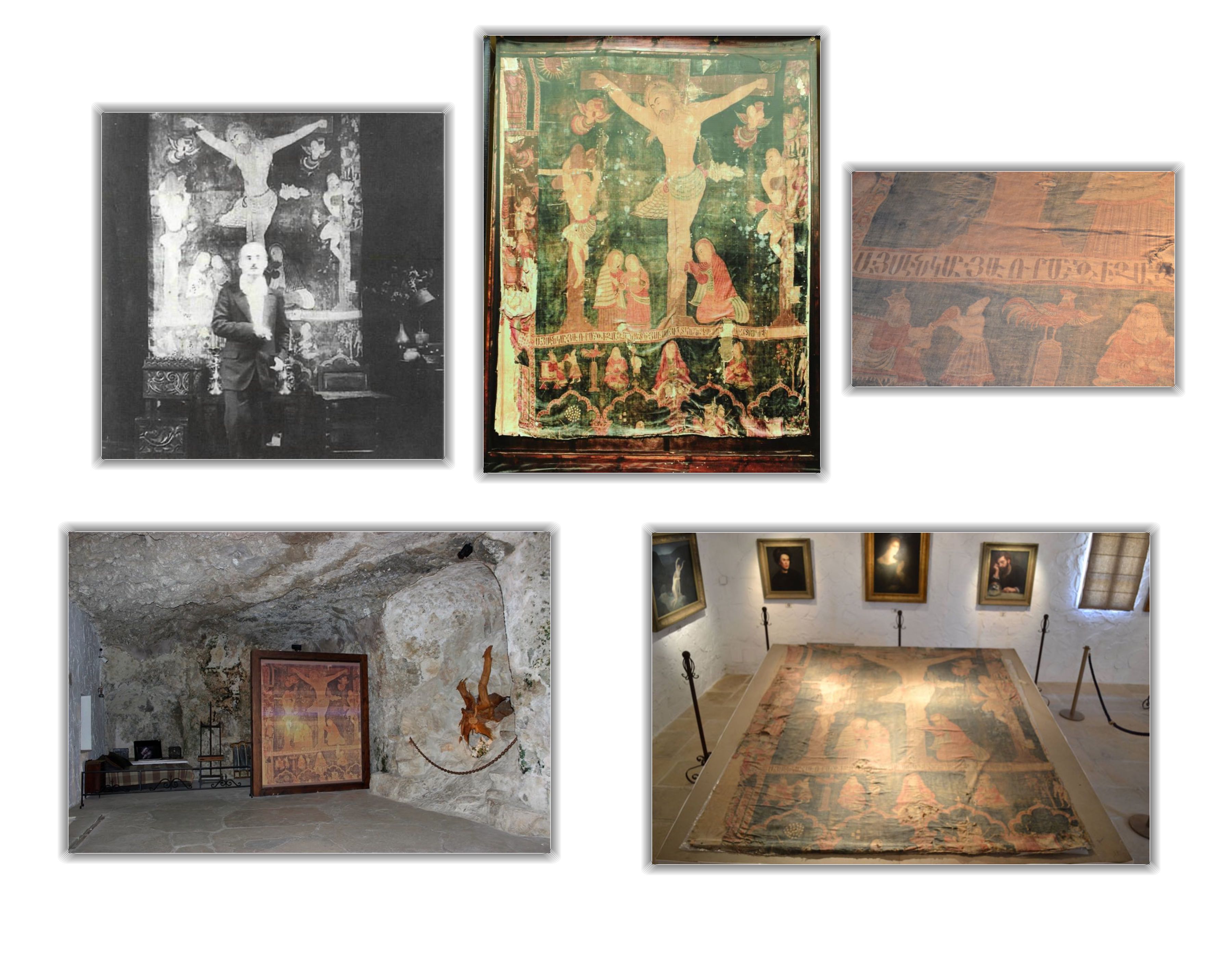 “Kahlil and I spent the evening in the studio. A glorious old linen of the Crucifixion filled all the lower wall – with his cerise velvet curtains at each side of it.”

On this occasion Gibran re-counted to Haskell that this item is from “the twelfth Century – Armenian Byzantine.” And he further adds:

“You can’t imagine how wonderful it is to live with. It makes everything else look small. It is the only crucifixion I have ever seen in which Jesus is blessing with his right hand – and there is no blood from either hand, nor from the feet or the side.”

The tapestry, which appears against the background of a rare photographic portrait of the artist, is now exhibited at the Gibran Museum in Bcharré, Lebanon. 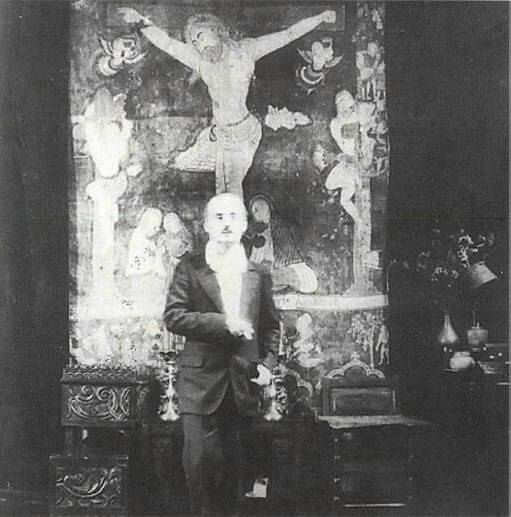 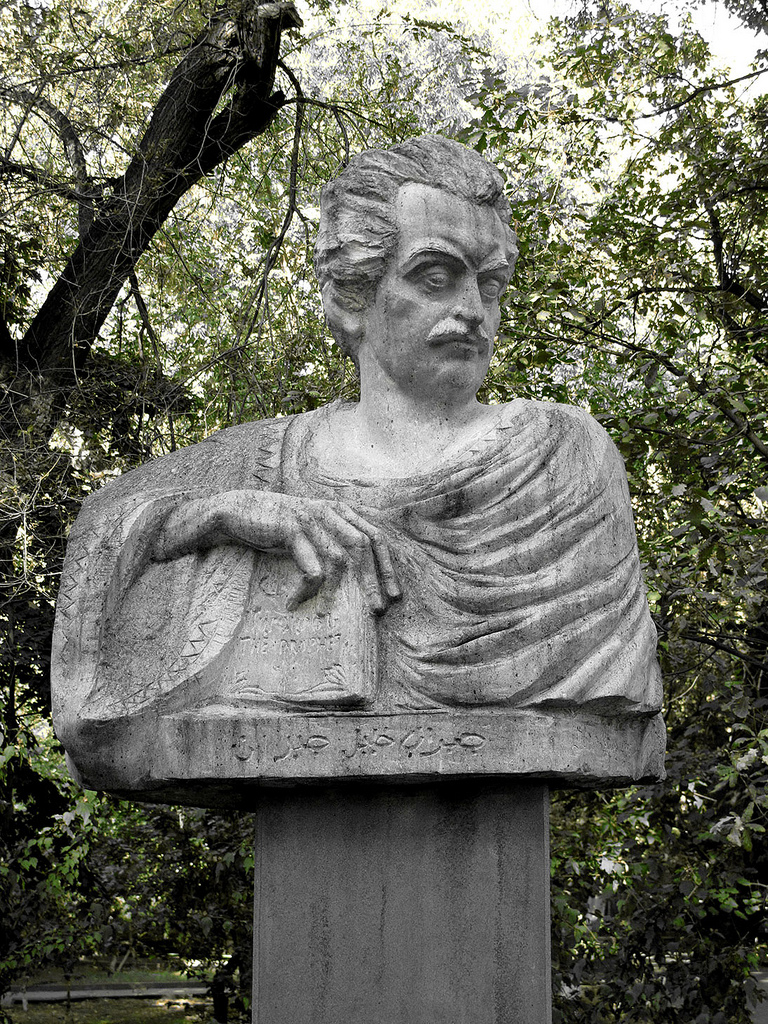 Gibran's fame among the Armenians is mainly linked to the book “The Prophet” (New York, 1923). The first translation 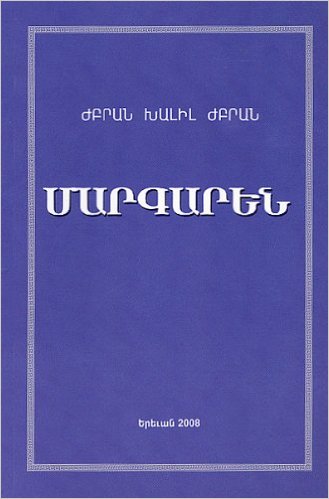 of Gibran’s masterpiece in the western (Armenian) dialect was published in 1966 by Sisak Varzhapetian with the title “Margarēn”, followed by the 1984 translation, by the poet Vahe Vahyan. In 2008 the first translation into the oriental dialect was published and edited by Hovik Yordekyan. The sculptor, Levon Tokmajyan made a bust of Gibran in 2005, which is now placed in Yerevan Park within the Armenian-Beirut district of Kentron, a tribute from the Republic of Armenia to the memory of the Lebanese author. 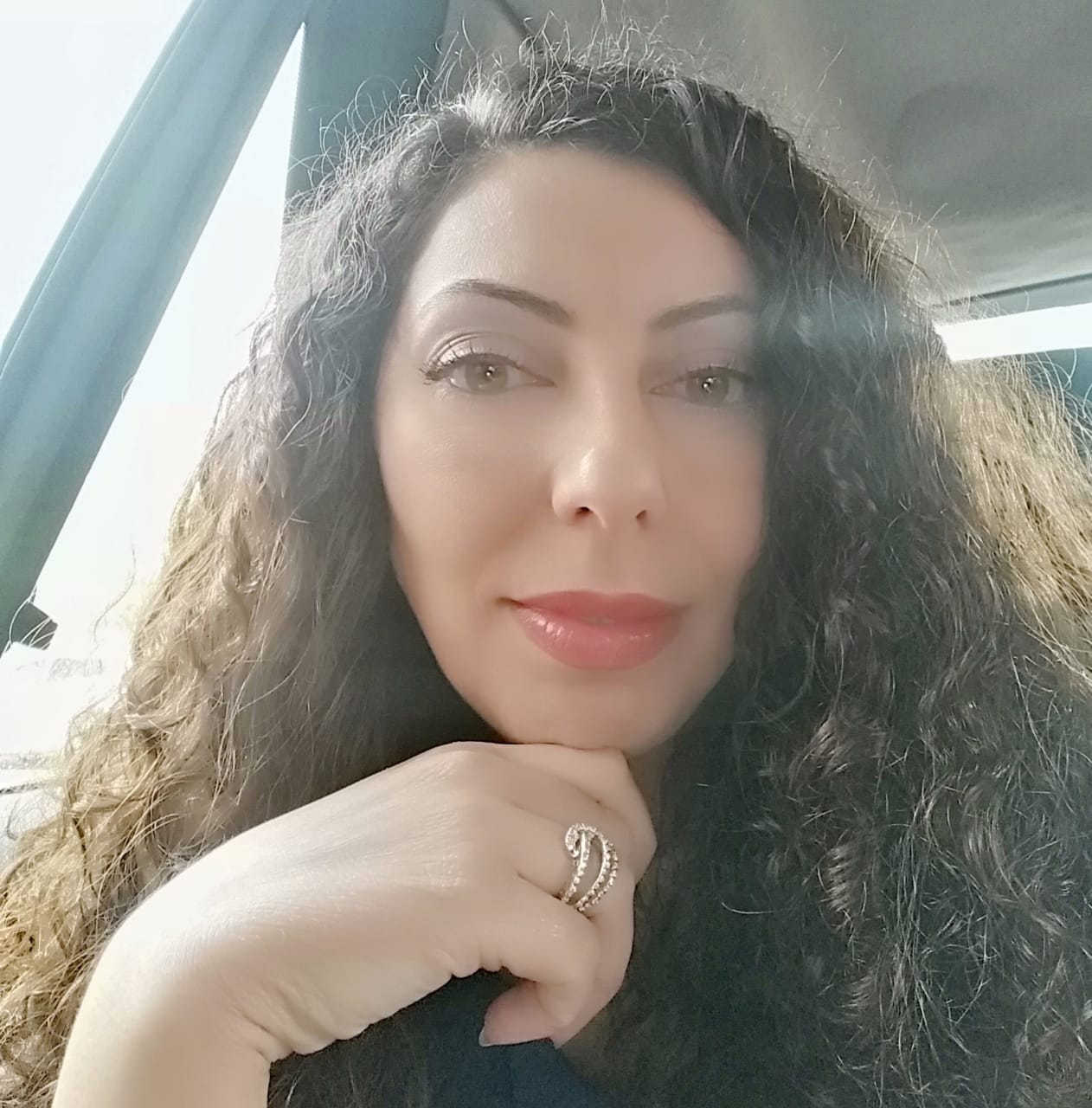 Contributing writer Nadine Najem has a Masters degree in Musicology from the Holy Spirit University – Kaslik-Lebanon. She also has a Diploma in Italian Language and Culture from the Italian Cultural Center of Beirut, and a further teaching diploma from Siena University in Italy. A Writer and Poet who is fluent in Italian, French, Arabic and English  works as professional translator. Her mother is Armenian.

Credits and Thanks to:

Kahlil Gibran and the Armenians - in Italian:

Arabic Translation of "Kahlil Gibran and the Armenians": 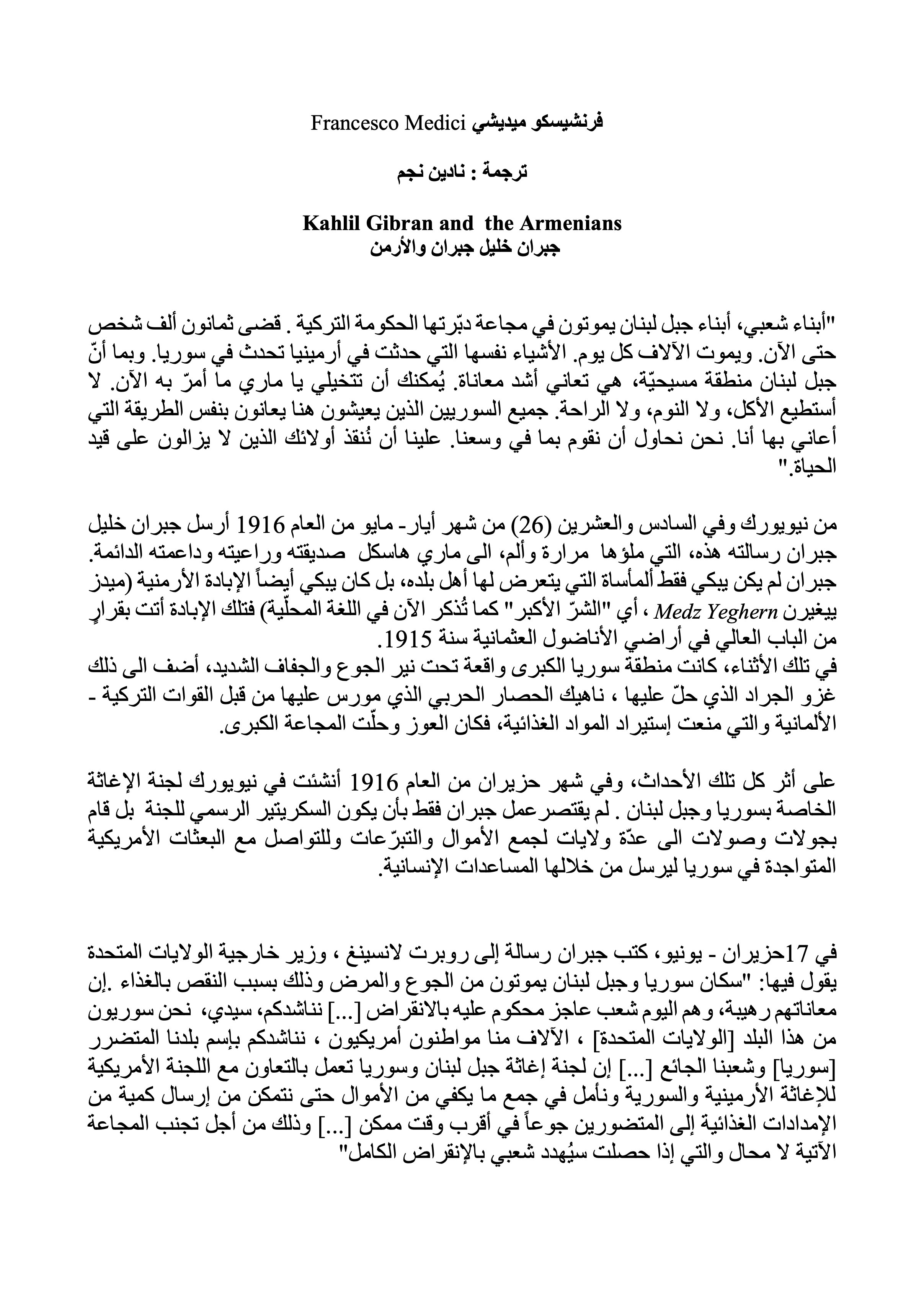 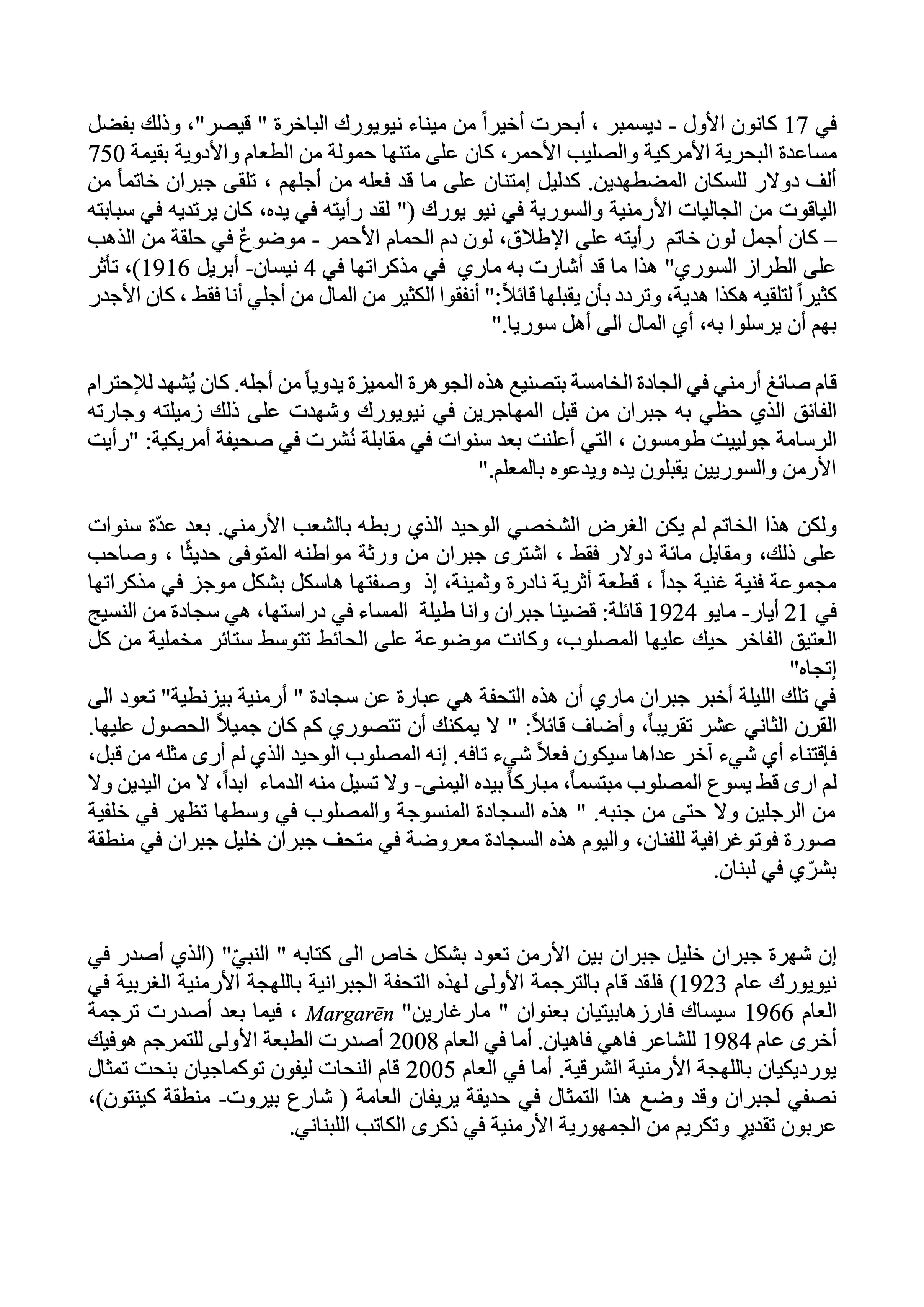 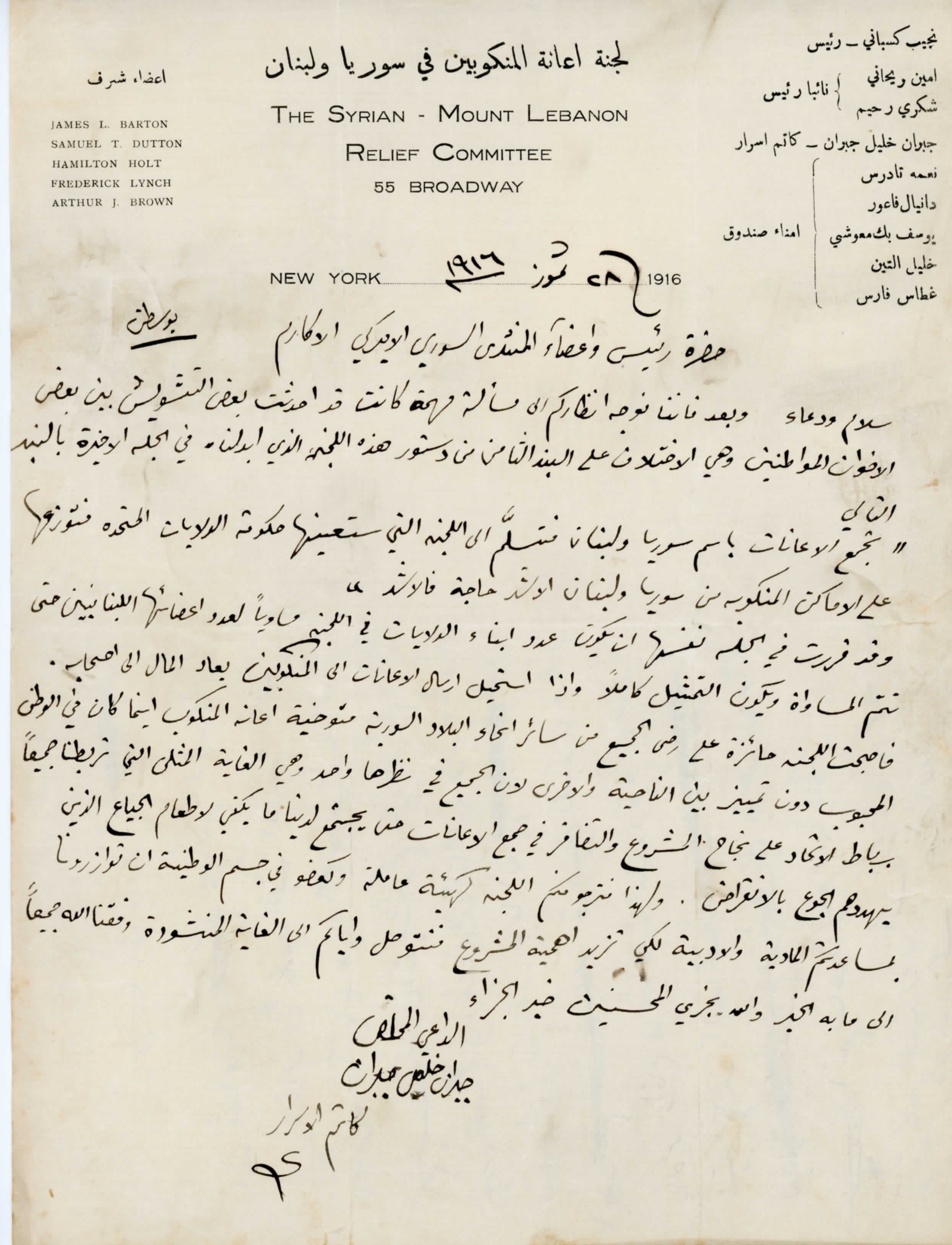